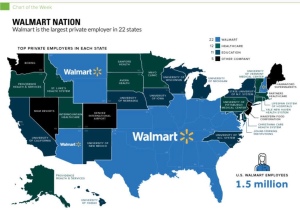 In 45 states, the largest private employer is either Walmart, a university, or a medical services system.

In 13 states, the largest employer is a medical services provider. Let’s say there are (just guessing) 1,000 or so top healthcare executives able to direct political contributions via PACs and “research” by industry-funded organizations. This confirms why Members of Congress are eager to gut healthcare (Affordable Care Act, Medicare, Medicaid) for consumers in order to fatten profits for the medical services industry.

If the non-C/Suite employees of those medical services corporations joined with consumers to demand State Legislatures and Congress expand, not limit, access to healthcare, maybe the millions of voices/votes would override the millions of dollars of campaign contributions.

How many employees – in any industry – belong to unions? How many unions are effective in expanding membership and public respect, lobbying Congress, and endorsing progressive, pro-labor candidates?

Could unions AGAIN be instrumental in rectifying income inequality? Could they become powerful in increasing employment by freeing up money for capital improvements and wages (by highlighting excessive executive compensation and through pro-labor tax incentives) and decreasing incentives for off-shoring? Could unions influence state and federal lawmakers to not just permit but to encourage workers to bargain collectively to restrict work-practices that allow corporations to make more profit for the bosses and shareholders at the expense of employees’ quality of life?

Maybe. But only if unions believe they are relevant, and act accordingly.

Could union members, union organizers, union lobbyists raise up the voices of the majority so that the volume of dissatisfaction with the injustices of Corporate America drowns out the promises of election victories and government sinecures?

Yes, unions can do this. We did it before – in an even more repressive and punitive era. We can do it again.

And there is no better day than today to begin.